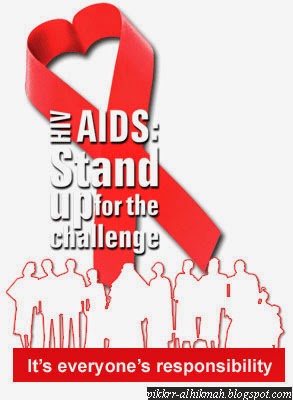 About 13,900 people have been found to be suffering from the disease until ens-2012: ministry

Riyadh, AIDS Watch Indonesia -  February 3, 2014 - Saudi Arabia no longer isolates patients infected with AIDS and lets them live a normal life following a breakthrough in the treatment of the killer disease over the past years, according to a specialist in the conservative Gulf kingdom.
Dr Nizar Bahbiri, a contagious diseases consultant at Suleiman Faqih Hospital in the Western Saudi Red Sea port of Jeddah, said he believes there would be no medicine that would totally treat and prevent AIDS in the next 10 years but added that the current treatment allows AIDS victims to live a relatively normal life. “In the past, we (doctors) used to say an infected man cannot marry a healthy woman…we also said if such marriage takes place, the infected husband must wear a condom to have sex with his wife…but now the situation has completely changed with the current available treatment….a man can now marry a healthy woman and they can have healthy children and live a normal life,” he told Sabq newspaper. “In Saudi Arabia, the situation has also changed….we no longer isolate or quarantine AIDS patients…we even place them with normal patients in the same room…we also allow some of them to live at home and go to work like any other normal man provided that they use the medicine prescribed to them.” Bahbiri said sexual engagement has been found to be the main case of the Acquired Immuno Deficiency Syndrome in Saudi Arabia, with a population of around 30 million at the end of 2013, including nearly nine million foreigners. “We have launched a campaign in Saudi Arabia with the aim of easing the fear of AIDS and to encourage infected people to have early treatment…those who have the least suspicion of having AIDS must have a test…in case they test positive, they will be treated and allowed to live a normal life like a person with any other illness,” he said. “AIDS disease has become very simple in case it is detected early…I tell those who test positive for AIDS not to have any fear.” Bahbiri gave no figures on AIDS cases in Saudi Arabia but healthy ministry estimates showed around 13,900 people have been found to be suffering from the disease until the end of 2012. Like in other Gulf nations, expatriates found to be infected with the diseases are deported from the kingdom. (www.emirates247.com).
Diposting oleh Admin [AIDS Watch Indonesia] di Kamis, April 03, 2014