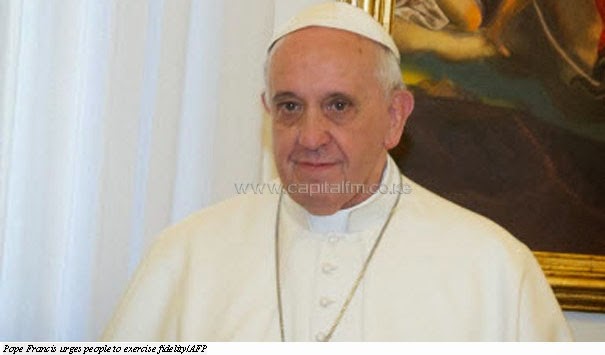 VATICAN CITY, aidsindonesia.com (Apr 8, 2014) – Pope Francis called on Monday for fidelity and chastity to be used to fight the AIDS virus in Africa, in an address to visiting Tanzanian bishops that — in line with Catholic doctrine — did not mention the use of condoms.

Francis thanked medical personnel working for the Catholic Church who “care for those suffering from HIV/AIDS” and praised “all who strive diligently to educate people in the area of sexual responsibility and chastity,” the Vatican said in a statement.
“By promoting prayer, marital fidelity, monogamy, purity and humble service of one another within families, the Church continues to make an invaluable contribution to the social welfare of Tanzania,” he said.
AIDS campaigners often disparage the Catholic Church for not recognising the use of condoms as a means of preventing the spread of the virus.
Francis’s predecessor Benedict XVI was heavily criticised for saying during a trip to Africa that the distribution of condoms “aggravates” the AIDS crisis. (http://www.capitalfm.co.ke/).
Diposting oleh Admin [AIDS Watch Indonesia] di Rabu, April 09, 2014