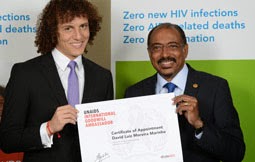 UNAIDS leverages the power of football ahead of FIFA 2014 World Cup
Geneva, aidsindonesia.com (16 April 2014) - In the lead-up to the FIFA World Cup in Brazil starting in June, UNAIDS has teamed up with Brazilian football champion and vice-captain of the national Brazilian football team David Luiz, appointing him as UNAIDS International Goodwill Ambassador.
David Luiz, who is playing in the Premier League, will support UNAIDS by promoting the organization’s key advocacy and outreach initiatives. He will help mobilize football fans around the world, particularly young people, with important messages calling for an end to discrimination, advocating for HIV prevention and access to HIV treatment for people living with HIV.
“I am convinced that David with his heart and compassion will make a big difference reaching out to millions of young people,” said UNAIDS Executive Director, Michel Sidibé. “In football, players come together to produce results. In the same way we must unite and as a team get to zero new HIV infections. During the World Cup, everyone’s eyes will be on Brazil and David will be an inspiration both on and off the pitch.”
“It is a massive honour to be a global ambassador for UNAIDS and I want to use this position to spread the word about how to overcome AIDS around the world,” said David Luiz. ”People will be looking to my country Brazil to see great football at the World Cup and this is a great opportunity for UNAIDS and I to speak out—and I want to help make UNAIDS the winning team.”
David Luiz is featured in Protect the Goal which is a UNAIDS campaign using the popularity and convening power of sport to raise awareness of HIV and drive young people to commit to HIV prevention. In addition, David Luiz is promoting UNAIDS’  #zerodiscrimination campaign, which calls on people to celebrate everyone’s right to live a full life with dignity – no matter what they look like, where they come from or whom they love.
Of the total estimated 35.3 million people living with HIV around the world, an estimated 5.4 million are young people aged 10-24. Many are unaware of their status. There are some       900 000 adolescents (10-14) living with HIV. In addition, an estimated 780 000 of the total 2.3 million new HIV infections worldwide are among adolescents and young people aged 15–24 with 97% of the new infections occurring in low and middle-income countries. (http://www.unaids.org/).
Diposting oleh Admin [AIDS Watch Indonesia] di Rabu, April 16, 2014